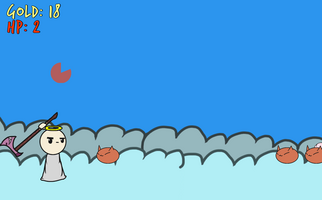 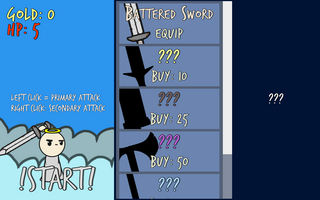 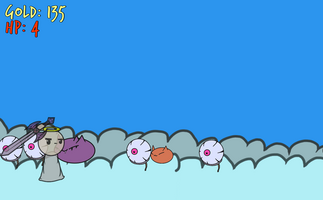 Heya, so I have started writing these casual postmortems at the end of every game jam I participate in. This is mostly for future reference, basically I have been using these as a Game Diary. The story of this Jam is not really like the others, with my other Jam games the story goes as such, I came up with a big idea that I had to cut down to the bare minimum. The story for this jam basically follows that pattern, but I wont really talk about that as much this time.

The story for this game is how it was a victim to game jam burnout. This is my 8th game jam and 6th finished game jam. However it is my 3rd finished game jam, in the last 25 days. Ludum dare is still in the rating phase as I write this. Im still relatively new to game jamming, so this has been alot of jams in a short period of time for me. After this game jam im going to take a break from them to work on a bigger project that I can go slow with. ANYWAYS to the actual game jam.

So im going to be blunt here, I am really not happy with the result. I have a few things I always want to accomplish during a game jam. First, make something I have not made, which I achieved I learned alot about Unity's Animator Overrides and I tried a new programming structure. The game play may seem pretty simple for most, but I have very little experience with action games or collisions in general. Most of my projects at this point have been turn based strategy type games. The Second thing I want to accomplish with game jams is, To make a full experience, this has been the first jam that I failed at this. Even in my first game jam (which is no longer available) a player could win the game.

So the Jam was run by a company that has a Game marketplace, so before the jam started I assumed the theme would reflect that. When I read the theme I realized I was being dumb, because I saw the theme coming but did NO pre-planning around it. I blame this on the burnout which will be a constant theme through out all of this. I wanted to try out Unity's Animation Overrides and so instantly settled on a game where you smack things the slowly move towards you. SECOND MISTAKE, common advice with game jams is to not settle on your first idea, for most game jams I will sit outside with my note pad and think though the theme. I did not do this, I just thought meh... I blame the burnout, part of me just assumed the project would go well so lets get it over with. So I have my fairly limited game idea and was going to run with it. That was the entire planning process.

Making the game was nothing special, I hit no major roadblocks programming the combat and enemies. I knew I would need multiple enemies behaviors, so I made the enemy system quite modular. Given time I could in theory program A LOT of enemy types. I made 2, and a large version of each. To be honest the bulk of the project was drawing weapons, the theme was 'Loot this' and we needed a minimum of 5 obtainable 'loot' so I decided to make a weapon unlocking system. I had plans to make alot of secondary attack types, this was super modular as well, and I could have made projectiles, dodges, parries, ect. I ended up with 2 special attacks, a heal and a strong hit... I was so burnout creatively that any time during this jam that I could make alot of cool things, my mind would just cloud up and I could not think of anything.

After everything was in place, I could play the game and see what was needed. The game was very one dimensional, if the weapon is fast enough you just spam click and never loss. I slowed the attack speed down which resulted in situations that are literally impossible to not take a hit. The problem was built into the system, I could have pivoted the design from there and start again, but I uh... didn't? I do not really know why I didn't and I literally made this game a day ago. At this point I basically just said f*** this and just tried to implement more weapons.

The game ended up feeling like a prototype in the end, and the reason is because the game has no end. You just keep going until you unlock all the weapons and give up. This really bug me, I never really gave it much thought till after this game, but every jam game I have made has a end goal and in most cases a animation to celebrate or a story ending. It really makes a huge difference, it makes a prototype into a full experience. This obviously doesn't really apply to high-score challenge games, but I don't make those (mainly because I am not a fan).

So this postmortem will probably end up being shorter than my other ones, there really is not as much to say about a prototype compared to a game. There was no major roadblocks other than my own poor self management. So that this is not a useless post, I want to talk a little about making a full experience.

The reasons you should want to craft a full experience for a game jam are important, Jams can be short and hard so any time wasted matters alot. The biggest reason is that it can easily elevate your game from prototype to Game. Whenever I am in a rating phase of a game jam, and play a game with a clear goal and end, it feels like I could be playing a browser game on something like kongregate. When a game just drops me in to play with systems, it can really feel like im just rating a prototype, I look for the flaws so I can give good feedback. The second reason to craft a full experience is that with a little preplanning  it actually is not that hard to do.

Here are the 2 things that instantly make a prototype feel like an actual experience.

Never underestimate the power of a player who knows why they should care. When I say context what I really mean is that the player, knows WHY they are doing something, it creates a veil over that game that makes the player more into your jam game. "Go into this room to try out our shooting game" reminds you that this is a jam game, while "You need to kill these evil cubes because they want to eat you" (bad example) doesn't break the illusion that this is was made in a short amount of time. Context can be achieved with Setting or Character. Basically just set up your game to display some text that summarizes the heroes motive or just bake the Setting into the visuals very clearly. Zombies are pretty over done in media, because they are so good at this. It is very easy to relate to someone who doesn't want to be eaten.

The second thing that can round out a experience is having a clear goal and ending, having an ending will give your player a REASON to actually keep playing. I have personally only played some jam games for around 2-3 minutes just because it was clear there was no ending to discover and I got to the jist of the game-play. While games with the promise of a ending can keep me playing until I discover it. The Reason I call this Goal and not ending, is that having an ending is one thing, clearly showing the player that there IS a ending is another. This can be achieved in a lot of ways, having clearly defined levels, having a measurable goal like "Find and Kill the boss" will make the player want to SEE that boss.

This postmortem is a mess, I have mostly written this to "Not break the chain" of writing these, I know future me will look back on this and wonder what was going through my head at the time. So to future me, DONT LET YOURSELF BURNOUT. Take breaks between jams.