Heya, this is a Postmortem of my 5th finished game jam game. This is my 1st Postmortem, so expect it to be very casual. I have decided to make this for a few reasons:

- To document my thoughts, I like to look back on the games I have made and think it will be interesting to future me to see what current me thought about this project.

- To Share tips I have picked up from jamming, This being my 5th finished Jam and 8th jam attempt I have picked up small tricks. Not all of these will be useful to everyone but they work for me.

- Practice getting my thoughts down on "Paper" and general long form writing. If you are reading this and have tips on writing information based articles I would love to hear about it!

- For fun, I get alot of joy out of getting my views out there and find it relaxing in a way.

Last Sacrifice is a Voting simulator based on the game show Big brother and other shows of its kind. You have to interact with others in order to push the votes in your favor. This was for the MiniJam 53: Oasis, which had the limitation "Permadeath". To give away my view on the project in the opening, I am happy with it but not super happy. I personally enjoy it alot, and am writing this before the submission time, so I have yet to see what others think but I am worried about the tutorialization of the mechanics. To summarize, I enjoy the game because I know all the rules and so I can manipulate the game how I need to. I have always struggled making a good tutorial in game jams, which is natural, yet I always get a little weird with my mechanics and so extra explanation is required. I could always just make a game familiar enough that anyone can understand it, IE a shoot-em up or platformer. But thats not my style. So to get into it, I will give an overview of the process and what I learned this time around.

So I have a weird sleep schedule, I was awake at 6pm, 4 hours prior to the Limitation being announced. When I learned the Limitation I was a bit underwhelmed, "Permadeath". It was pretty easy to basically ignore, game jams are so short that making life systems or checkpoints takes up precious time, so pretty much all my jam games have permadeath. I decided to double down on the theme, if the players permadeath was underwhelming to me I would make a game with a who cast of characters to kill! So I thought up an idea of a city management game, with limited population that never grows, where you have to sacrifice characters and they all have different skills! I pretty much instantly scraped it, realizing I have 3 days and I burnout very fast anyways. I like the idea of killing off a cast of unique characters. So I simplified the concept to, you vote for people to sacrifice to a oasis or something. I made the voting system in like,  2 hours and pretty much never touched it after that. I decided to draw some characters at this point and literally googled "Desert wanderer", the top bar thing suggested "anime" as an additional search criteria. Being a weeb I clicked it and instantly got reminded to an anime that I love the character design specifically in. It is called 'Desert Punk' 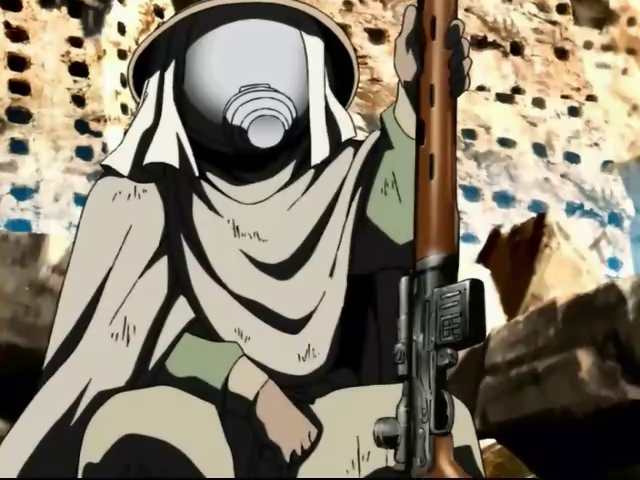 Inspired I drew My first character, I got caught up enjoying the drawing that I spent 2 hours drawing one character. This is the first time I was not using A) pixel art and B) A picture off my phone. I am very comfortable doodling cartoon characters, but not with a tablet. FIRST MISTAKE, I should have practiced a bit before the jam. The first character is still my least favorite I ended up drawing for this Jam. I was very stubborn that it would be a cast of 10, I do not know why. I Kinda just accepted that 20 hours of this jam would be for drawing, I did slowly get faster drawing the characters but eh.

I spent most of my programming time getting the loyalty system working. The loyalty system is a simple opinion system, every character likes every other character x amount, and they vote for the character they dislike the most, simple. But I knew I would need to tweak the starting values, the first vote is always on Denis so that the player has time to figure out whats going on, basically he is a pseudo tutorial. The other 2 key characters are 'Jordan' who will never vote for the player and 'Chad' the character everyone else loves, basically the main enemy.

Luckily these 3 characters were interesting enough, I think. There are other personality based starting conditions, but I dont know if anyone will notice them. A lot of the opinions are random, just for variance as I tend for players to do multiple runs. At first I thought I would get players to play multiple times via difficulty, If its hard it will take multiple trys! gg ez. Its been my approach in other jams and I am not convinced this is the best approach. At this point all the basic game play and most of the characters are drawn. When I play, maybe its an ego thing, but I found the characters interesting, I have head cannons about how they would interact and based some of the starting perimeters around it, so I just like playing to see how the votes would fall. Two things struck me, 1) I like my characters, I should lean more into them and 2) the game always gets down too 2 people and the player auto wins because in ties he wins. So I decided to kill 2 birds with one stone, I would end the game at final 2, and every character would have a unique ending. I could polish up and balance the game play but I would rather give something interesting and character based for players to discover. I ended up rewriting the endings for each character 3 times, took about 3 hours to write 10 endings that are consistent with each other. Im still not happy with the endings, they are interesting enough but I would have like to explore the setting more.

Something to note with my process, its kinda of a new thing for me but I like to have a Prinny show up in my jam games, legally distinct, so its more of a nod. I have loved how the disgaea games would have all of there games spill in to eachother. I just like Prinnies... For those who dont know. THIS is a prinny 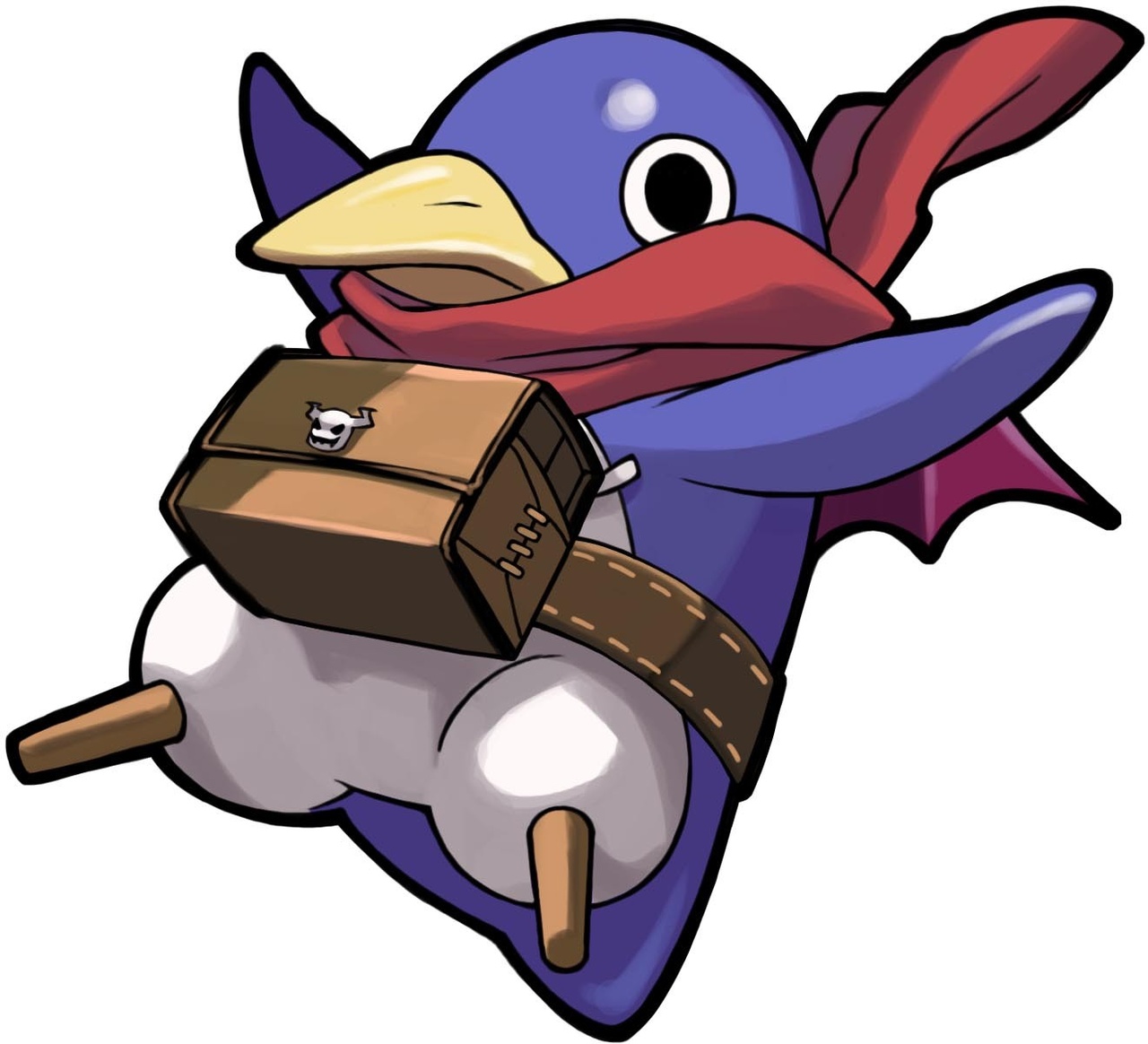 When I got down to the Last character to draw, I decided to ask my friend group chat for ideas. Coming up with 10 character designs burned my brain out of ideas. most of the designs were just, Guy with gasmask so I didn't really start off inspired. I got way to caught up on the Desert Punk ascetic, My friend came up with the most interesting and thematically resonant character design in the who game. I asked for a character design and based the design off the fact that my game had a "Befriend" button next to a "Spread rumor" button. 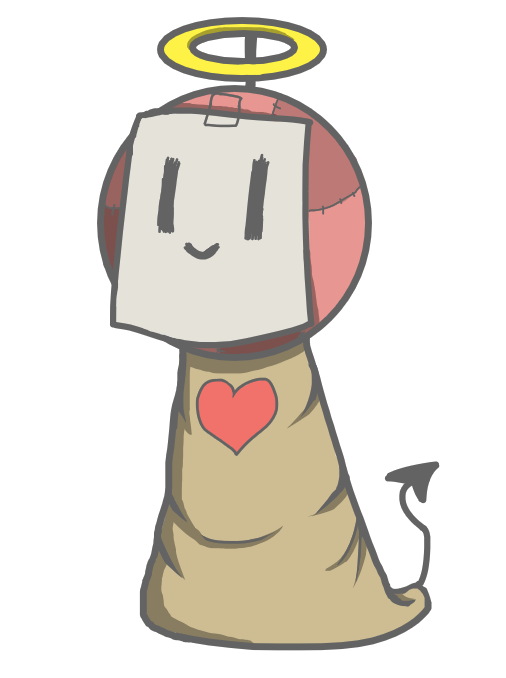 He did a pretty rough version of this character in paint, but it captured the theme of the game better than all 9 of the other characters I came up with. It made me want to go back and redraw the others putting more care into symbolism and themes. If you take anything away from this postmortem, ask people for Ideas. My other entry Cat island came about cause I was hanging out with a friend and I asked him what he though of the theme "Island", he replied to me that all he can think about is a island in japan that has a cat population that is greater than the human population, this lead to me making Cat Island, which is one of my personally favorite jam results.

My biggest roadblock slash fear is the tutorialization, I do not think it is very intuitive by default and it is important to know how to manipulate the systems to your advantage. My tutorial is very basic, at this point I have to hope its enough for players to get into it. The game is not very hard to beat, but it is hard to win with specific characters alive. It is something I will have to wait for feedback to know for sure. The characterization is only good if people can actually get to it.

Well I have some thoughts on the project which is meaningless until I get feedback, but I think spending the time on the endings being distinct was a good call, while the game play only really shows their personality if you are looking for it I think the characters get alot of fleshing out in their endings, The game at its core is about characters and a full version would probably be animal crossing were you trash talking each other while getting to know everyone. It is something taught by so many game designers, but focusing on EMOTION is super powerful, it is basically what lead to subnautica. I am starting to see my personal weaknesses as a game dev, I like stories as systems, IE what would Big Brother be like as a system, yet I do not know how to teach players how to get into it.

I think the big reason im so neutral to this project is that I do not feel I learned that much by doing it, alot of what I made is stuff I could make in a few hours, I hit very few coding problems that I had to learn my way past. Maybe if the character focus works out, I can say I learned the value of that, but im not confident the characters out weighing a unbalanced and unruly system.

If your looking for tips, I would say plan to finish the game play in day 1, so you can use the rest of the time turning that small game into an experience, either through story or insane levels of polish. If you cant finish the gameplay in 1 day, maybe cut it down. obviously this doesn't apply to longer jams, and I do not have a good measurement for longer jams. For a month I would probably shoot to have the game play done in the first week, then for a week long jam 2 and half days.

Also shout out to the website Abundance music for having a sick as hell music generator for a tone deaf guy like me.

I had fun with this jam, and did make something new. It is something I would enjoy a full version of, so overall it was a success. But I do feel luke warm about this, It feels like just another game to add to my count. I would like to build an old library of games, but I want every game to have something unique or interesting about it. This entry definitely satisfies that, but I am left worried about how it will be received. It is a game I enjoy playing, and I like most of the characters, but I am constantly worried that my tutorial is terrible and the game will be unplayable because of it.

I made a thing I can show people and be proud of, which I guess is enough.

I had fun writing this, and will probably do so for every jam from here on out. I think it will be fun to look back on this and judge past myself in retrospect.